Snares are a major hazard for painted dogs and removing them is rarely straight forward. This is a story about a snared dog called Cusp and how Painted Dog Conservation (PDC) responded to the emergency.

The event took place at the beginning of this year and tells of the six days when Peter Blinston, Jealous Mpofu, Dr Hillary Makzikanda, Nick Dyer and Munyaradzi Chiwara went is search of the Broken Rifle Pack, in an attempt to save Cusp’s life. 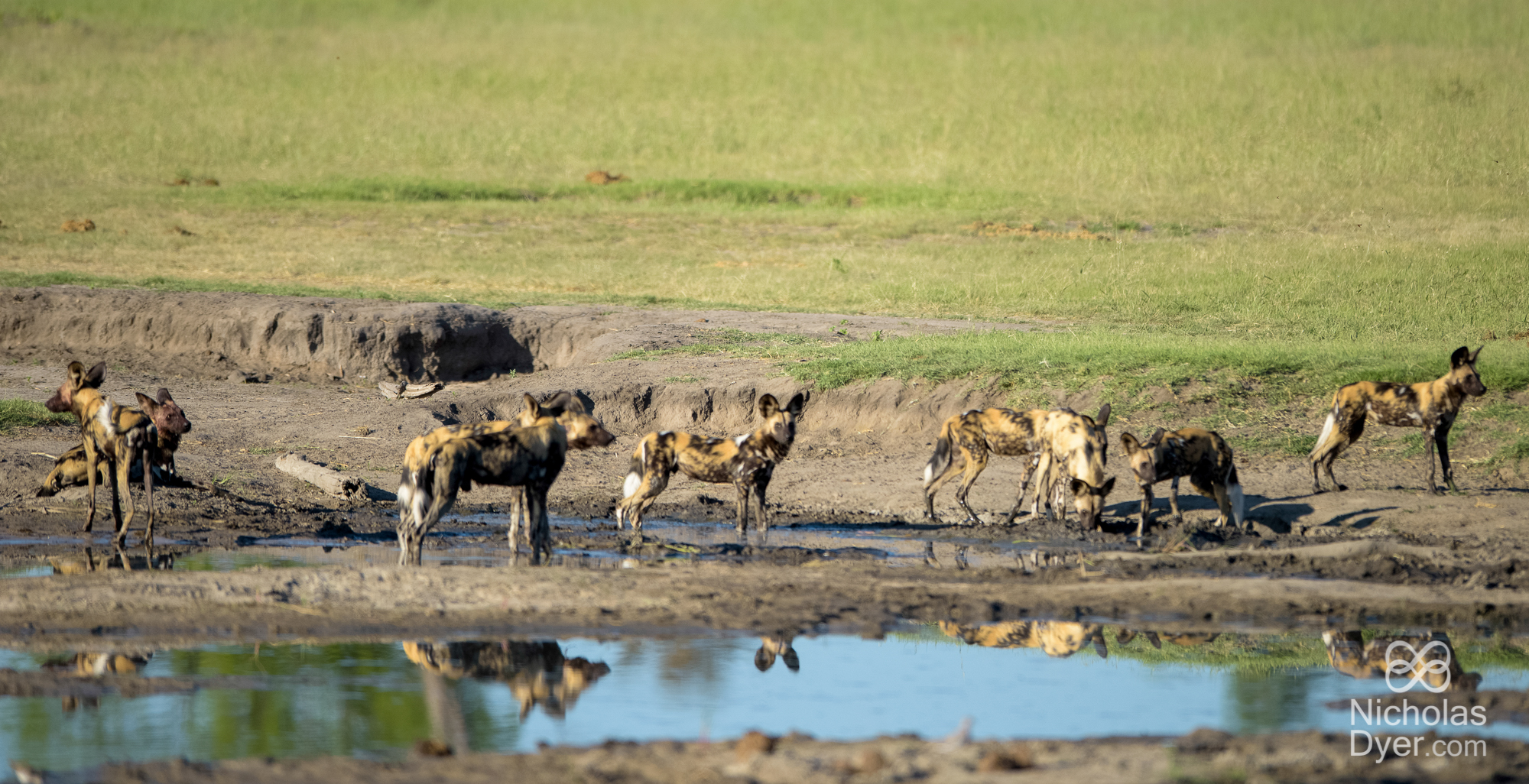 It was not the greatest start to 2016. Two emails arrived in succession informing us that there was a painted dog with a snare around its neck. The reports came from Mark at Bomani and Sam at Wilderness’s Linkwasha; both reliable sources from two luxury safari lodges in the south of Zimbabwe’s Hwange National Park.

One email contained pictures of a light brown dog with a distinctive black and white stripy tail. More noticeable was a raw bloody wound that circled its neck like a macabre necklace where the skin had been stripped bare by a copper snare. The metal was still plainly and painfully visible and the creature could only be suffering.

Our data files told us that it was Cusp, a female from the nine-strong Broken Rifle pack. This seldom seen pack is named after the waterhole where they were first found and, roaming far away from PDC’s base, it was not one we knew well.

With only 150 painted dogs in Hwange and less than 7,000 in the world, each individual is important to us. Without hesitation we cut our holiday season short and our festive spirits were replaced with a focused determination to find Broken Rifle and remove Cusp’s life threatening snare.

Snares are one of the biggest threats to painted dogs in and around Hwange. Poachers set them to catch bush meat, such as impala or kudu. But the wire traps don’t discriminate. All too often painted dogs are the victims and suffer horrendous injuries and frequently death.

A key PDC programme is the Anti-Poaching Unit, which tirelessly patrols rural areas to find and remove snares and regularly arrests those who lay them. Last year alone they removed more than 2,000, which would have saved countless animals a slow and horrendous death.

On the 2nd January a team led by Peter set off at 3am in two vehicles, traveling the 100km of rough roads to reach the Wilderness Safaris Concession before dawn. It is probably the most impressive area in the whole of Hwange National Park. Rich in game and with stunning scenery, it makes for one of the most spectacular wildlife experiences in Zimbabwe.

Unfortunately we were not there to game view, so our two vehicles split up to comb the vast road network, searching for any signs of Broken Rifle.

We spent the whole day patrolling in the El Niño heat of the punishing Southern African drought. Temperatures pushed through 45 Celsius just after midday and were probably even higher inside our cars. We crawled along every dusty road, spoke to the local guides and stopped at the lodges, all of whom were very helpful but there had been no further sightings by anyone.

We saw lion, elephant, roan, sable, wildebeest, even a pair of cheetah, but no dogs. Not even a paw print. Sam at Linkwasha helpfully gave us his most recent pictures of the Broken Rifle pack, which confirmed which pack we were after. Jo, the manager, showed us a detailed map of the area which helped us become more familiar with the terrain.

As the sun began to set we acknowledged that the operation was going to take longer than a day trip and that we would need more resource. So we reluctantly headed back to base, exhausted but not defeated.

The next day was spent in preparation for what we anticipated would be a long expedition. We would again take two vehicles and Jealous Mpofu, our award winning head tracker, cut short his holiday to join in the search. We spent that day loading camping gear and supplies into the Land Rovers for another 3am start the next day. It would be five days before we returned.

Day One: Hot and clueless

Back in the area we again split up to search the road network. The dogs had not been seen for days and so we had no real starting point.

What made the search harder was that there was still enough light from the waning moon to enable the pack to hunt well before sunrise. This increased their range considerably which meant that they could be anywhere, including the Ngamo Forest to the east and the wild areas to the south, both roadless and deserted.

Again we visited Bomani and the Wilderness Lodges and spoke to their experienced guides. Despite still not having seen the dogs recently, we were impressed by their understanding of painted dog behaviour and their knowledge of the area that Broken Rifle typically roamed. This helped in knowing where to look, but not where to begin.

We had travelled the road network all day in a fruitless search, never sure if we should have been driving somewhere else instead. But we were reminded of the Cheshire Cat’s advice to Alice and paraphrased it to fit our seemingly aimless meandering…‘If you don’t know where the dogs are going, any road will do!’

Bomani kindly offered us a couple of tents to sleep in, saving us the effort of setting up camp. We had been on the road since 3am and were deeply tired.

Just before bed we receive a WhatsApp from Jo, at Linkwasha. ‘Wild dogs have been sighted north of Makololo’ it read. At least we had a starting point for the morning.