Snares are a major hazard for painted dogs and removing them is rarely straight forward. This is a story about a snared dog called Cusp and how Painted Dog Conservation (PDC) responded to the emergency.

The event took place at the beginning of this year and tells of the six days when Peter Blinston, Jealous Mpofu, Dr Makzikanda, Nick Dyer and Munyaradzi Chiwara went is search of the Broken Rifle Pack, in an attempt to save Cusp’s life.

There were dogs everywhere. An hour into our morning search our radios were crackling with each vehicle reporting dog sightings. Broken Rifle were in full hunt, criss-crossing the roads around Davison’s.

Our sightings ranged from fleeting glimpses to a pause on the side of the road before the pack picked up a scent of some prey to chase and disappeared, only to reappear somewhere else moments later.

There was certainly no opportunity to fire a dart, not with any degree of accuracy or safety. More worrying was that none of us could see Cusp.

Soon the mayhem quietened down and the sightings ceased. We figured that the dogs had made a kill in the dense bush and hoped that they had only caught something small like a steenbok, as anything larger, like a Kudu, would fill their stomachs, making darting potentially dangerous and consequently impossible.

After an hour of searching the roads, we decided to wait by the waterhole in front of Davison’s Camp, suspecting that the dogs would want a drink after such an energetic hunt. We settled down anticipating a long wait.

After only five minutes, nine small creatures emerged from the distant tree line. It was Broken Rifle coming to drink. Through the binoculars we could see that their stomachs were not bloated.

Excitement flushed through us; the opportunity had finally arrived.

The dart gun was loaded. As they came to the waterhole we moved in closer, trying to search out Cusp. She was there! Two spikes of copper poked out below the flesh of her red raw neck.

Peter waited patiently for a safe shot; we needed Cusp to stay still with no other dogs in front or behind. It would be unfortunate indeed to miss her and hit another dog in the eye! Finally the opportunity was there and Peter squeezed the trigger.

The dart hit her hindquarters square but unusually bounced out immediately. Cusp jumped and ran to her pack who by now were leaving the water and heading for the trees. We watched nervously to see if enough of the drug had entered her system. We would not get another chance.

After a minute, Cusp began to wobble until her legs buckled and she collapsed, gradually becoming motionless. Her pack sniffed her and pushed her with their muzzles. But after a while, with no response, they moved off towards the trees with seeming indifference…what else could they do?

We waited patiently to be sure Cusp was unconscious before approaching her on foot. After a brief inspection we moved her out of the sun and into the shade of the Land Rover.

A thermometer was inserted into her bum to monitor her temperature, which critically must remain stable. Earmuffs and eyeshades were placed on her head as her eyes and ears would remain sensitive despite the tranquilliser. We were ready to inspect the wound.

Although it looked horrible, we were actually quite pleased. There was no sign of infection and the lesions were surface deep, not slicing her trachea or the tendons in her neck. One tooth had been recently broken, probably caused from frantically biting the snare, but Cusp should survive.

Peter worked with confidence, efficiency and gentleness, backed by his 18 years’ experience working with painted dogs. He cut the copper and carefully removed the noose and cleaned the wound. He injected her with a precautionary dose of antibiotics as well as a vitamin B cocktail to boost her immune system. Lastly, a blood sample was taken to be sent to the US for analysis. 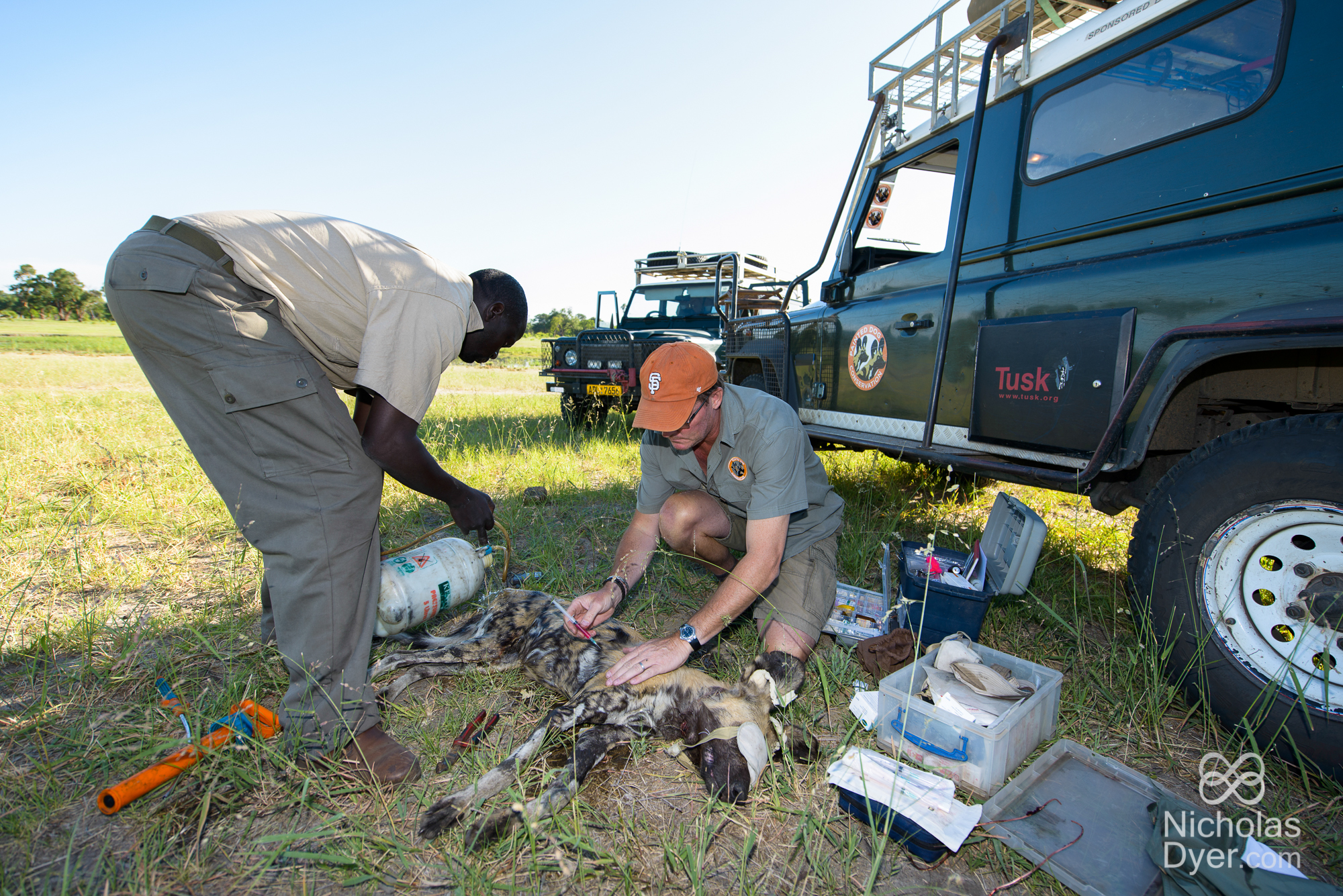 During the operation two Wilderness guides came to watch and be on hand should we have needed assistance. But everything went smoothly.

We carried Cusp into the Land Rover to move her off the hot plain and into the cool shade of the nearby forest where she could rest and recover.

Laying her gently down, Peter injected her with the revival drug and we stepped back. Cusp woke almost immediately and, after sitting confused for a short while, she struggled to her feet and stumbled around like a drunk reaching home after a very heavy night out.

Having regained her composure she lay down in the shade to sleep off her ‘hangover’.

In the late afternoon she would wake up and hoo-call to her pack and re-join them snare free. Jealous agreed to stay nearby and monitor the patient until this happened.

It had been a long and hot five days; six – if our first expedition was included. We were very tired although pleased that all our efforts had finally been rewarded.

On the drive back home we were in a reflective mood. We started to talk about the snaring incident and the broader implications around the last few days’ events .

We calculated that the cost of the operation was probably in the vicinity of $4,000…a big and unexpected drain on our resources. But at no point did we feel that the cost and our effort in saving Cusps life would not be worthwhile. There are too few painted dogs left in the world to discount the life of any individual.

We discussed the on-going debate around the ethics of putting VHF collars on dogs. There are those that disagree with the practice but the last few days clearly demonstrated at least one need and justification. If the pack had been collared, it would have saved time and money, but more importantly, if we had not found the pack, Cusp most likely would have died.

More depressingly, we talked about how this was going to be a challenging year for anti-poaching. The intense drought is putting local communities under severe strain. People are unable to plant their crops due to the lack of rain and are already losing livestock as their pasture is now exhausted.

For some, the lure of free bush meat will become hard to resist as they struggle to feed themselves and their families to survive. It is not only the animals that El Niño is affecting. We expect a surge in the number of snares laid this year and this will be very bad news for painted dogs.

As we left the stunning Ngamo Plains and neared home, our phones started pinging as we picked up signal. One was a text from our operations centre. It simply read:

‘We’ve seen Gceke from the Ganda Pack with a snare around his neck and it looks ugly. And a tourist has sent us a picture of an unknown dog near Sinamatella…it’s a male and badly snared as well.’

Hopefully there would be time for a shower.

Painted Dog Conservation
African wild dogs (also know as painted dogs) once ranged across Africa, with a population of over 500,000 in 39 countries. Impacted by poaching, road kills, and loss of habitat, only 6,600 dogs are now thought to remain on the whole continent. Zimbabwe, where Painted Dog Conservation (PDC) is headquartered, is one of their last strongholds.

PDC is dedicated to reversing this decline and the real threat of extinction. Our main operations take place in and around Hwange National Park as well as in Mana Pools National Park.

Here we have extensive and established programmes focused on:

Each programme is making a real difference to the wild dog’s chances of survival and we are grateful for every donation we receive to support our work.

Peter Blinston
Peter fell in love with African wild dogs while watching documentaries in his native England. He volunteered for PDC from home in England for two years and then initially moved to Zimbabwe as an unpaid six-month volunteer. He has now been there for eighteen years and serves as Managing Director. Peter has translated the initial vision for PDC into effective programmes that are making a real difference to the long-term survival of wild dogs

Nick Dyer
Nick is a wildlife photographer who lives a nomadic lifestyle exploring eastern and southern Africa. Nick’s passion for wildlife and photography began when growing up in Kenya. On leaving Kenya he worked in London as a fund manager and subsequently ran a successful marketing business after taking a career break to journey across every roadless desert in Australia. He returned to Africa in 2012 to live his dream of full time photography and satisfy his lust for adventure. He now uses his photography, writing and business experience to make a difference where he can and has a particular passion for wild dogs.